Skip to content
As we mentioned in our last blog post, to get around New Zealand, we decided to go with Stray, a hop on / hop off “tour” bus. After doing some price comparisons with renting a car or camper van, Stray, at about $500 USD each for 3 weeks of travel, turned out to be the most cost-effective way to see both islands. (Worth noting: this is an even better deal if you have more time, as the Stray pass is valid for 12 months, you can hop off and stay in a spot for as long as you’d like, and you can repeat the loops as often as you’d like).
We kicked off our tour from Auckland on a Tuesday morning at 7am. Our guide / driver was named Pacman and right away, we knew we were in good hands. A friendly and enthusiastic local from the south island, he made a point to get to know everyone on the bus and filled us in on cool facts about NZ and info for our itinerary as we left the city. At this point, I think Santi and I were both excited but feeling a bit of trepidation – would we like being on this bus for so many weeks? Would we get to know anyone else? How tired would we be moving to a new spot almost every day?
For our first destination, we headed to a beach town called Hahei, on the northeastern coast. This was a perfect way to start the trip, as it’s an exclusive stop for Stray. This meant the accommodations were beautiful and the beach was nearly empty! That night we did a group dinner for the 40 of us, which allowed us to start to get to know some of the others on the bus with us. Before we know it, we are talking politics, education, travel, Donal Trump – you name it – with folks from all over the world, including Denmark, Holland, the UK, France, Spain, Russia.  After just 1 night, we knew we had made the right choice with Stray. 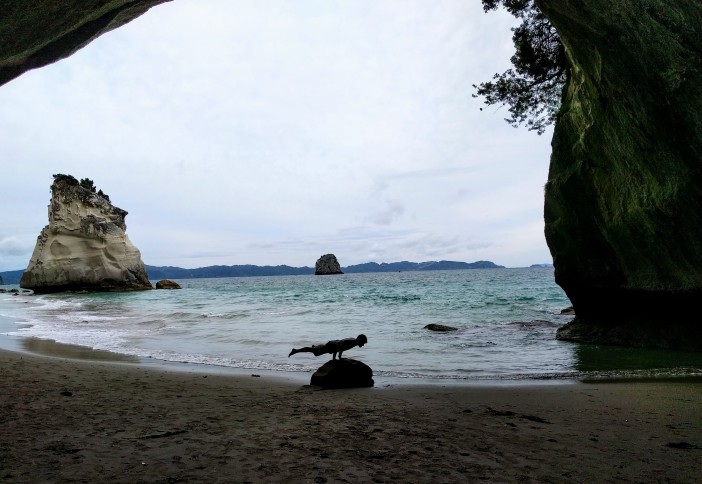 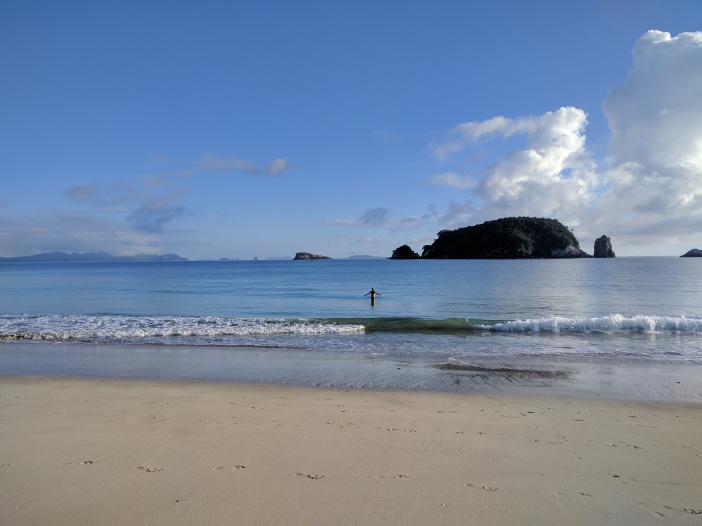 After a free day to explore the beach and check out Cathedral Cove, we drove to Raglan, one of the top surfing spots in New Zealand. Santi spent the day surfing while I went for a 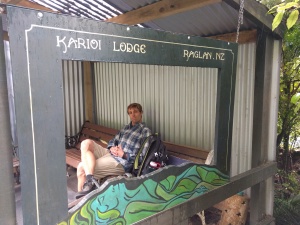 walk around the jungle. We stayed at a rustic hostel tucked away in some woods, with outdoor kitchens and yoga in a barn. We only wish we could have stayed longer there, surfing and getting lost on the nearby hiking trails.
From there, we zigzagged across the north island again to the Waitomo caves. There, we did a 2-hour tubing excursion, which involved walking, swimming and tubing in a glowworm cave 30 feet below the ground. Talk about adventurous! We were maneuvering 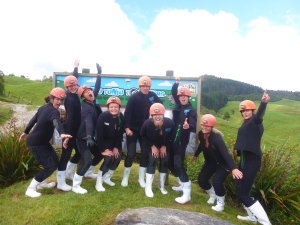 through tiny spaces between rocks, walking chest deep in muddy water, and looking at stalaglatites that grow 1cm every HUNDRED years (had to be extra careful to not knock one down with our helmets). We would highly recommend any excursion to the Waitomo caves – you can’t go wrong with any of the options. 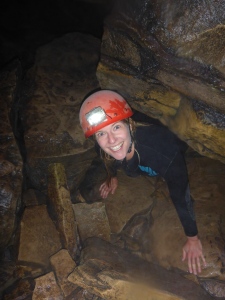 After that we headed to Rotorua for the night, one of the geo-thermal destinations. Although it definitely smells a bit like rotten eggs as you’re walking around town (due to all the sulfer in the water), it’s pretty incredible to be so close to volcanic activity and see the ground in front of you bubbling with 200 degree heat. There’s even an entire lake that is boiling constantly due to all the underground activity. We spent a few hours at Hell’s Gate with a group of other Stray folks, treating ourselves to the hot springs & mud baths they have onsite. Highly recommend this too if you’re in the area. 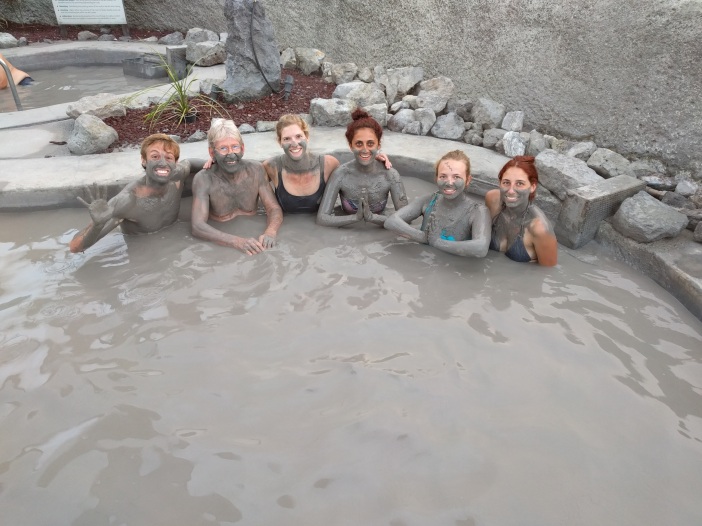 At this point, we’re about a week into our trip on Stray but it feels like much longer. Although we’ve seen the top half of the north island, there’s still a lot to go! In the next post, we’ll share what we did the following week as we made our way to towards the south island.