About a week ago, we said goodbye to the US for the next 6 months and made our way down to Rosario, Argentina. Since we arrived, it has been nonstop catching up with Santi’s friends and family while eating way too much postre (dessert) and pan (bread). I swear, even though this is my eighth trip to Rosario, I will never understand how the “Rosarinos” are so beautiful and fit, given all the carbs and sweets they consume. What also eludes me is how people don’t seem to be tired ever, though it’s common to go to bed at 1am, wake up to be at work by 9am, not nap, and eat facturas (more sweets) at 6pm. Ahhh, to be Argentinian.

Before Rosario, we were in Washington D.C and Philadelphia visiting my family and getting a lesson in early American history. Although D.C. is well-known for its historic spots and museums (almost all of which are free), Philadelphia is equally historic, as it’s where the Declaration of Independence was signed and the first congress met in the late 1700s. We enjoyed touring Independence Hall, visiting the oldest residential street in the US, and exploring churches that are still in service some 400 years after their inception.

We had a really great time visiting with my aunt, uncle, and two younger cousins, ages 8 and 10. They are delightful and we had fun playing tons of games with them, taking them to the park, and reading stories.

As if that wasn’t enough, we also had two of the BEST meals our lives in Philadelphia. Zahav is the top Israeli restaurant in Philadelphia (maybe the US?). For a very affordable $54/person, we had tons of salads, hummus, tapas-style appetizers, followed by a truly revelatory roasted lamb with pomegranates and chickpeas that fell off the bone and is making my melt mouth just thinking about it. Then, as if we weren’t stuffed enough, 4 desserts were brought to the table to top off the evening. 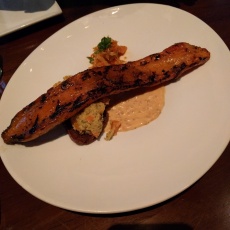 The second restaurant (photos above) would do SO well in SF but I’m glad it’s not there because it would be triple the price. Named Vedge, it’s a vegan restaurant that tricks you into thinking you’re eating meat (portabello carpaccio) or cheese (rutabaga fondue) or a carrot (ok it was still a carrot, but it was juicy, huge and contained flavors I didn’t know existed for a root vegetable). Yummmm.

After a couple days in Philly, we took while Amtrak to DC. It’s an easy and comfortable 2-hour train ride, where we met my cousin Lindsey, her husband Nick and their 8-month-old baby, Mason, who is the very best addition to the family. He is ALWAYS smiling! See??

We adore our time with Lindsey and Nick and it was even better because Lindsey’s parents and our Aunt Ginny came down for the weekend to see us off. We had a great time hanging with Mason – who was a weekend away from being able to fully crawl, exploring Alexandria and picking apples in Maryland.

We also checked out the Library of Congress and did a tour of the Capital. And of course, we visited &pizza, an awesome fast casual pizza brand started by Nick’s brother and that Nick is the Director of Operations for. They’re going on 18 stores in the DC-area with one in Philadelphia and more cities to come in 2017. We hope it crosses the Rockies to SF soon enough because it is SO FREAKING GOOD. 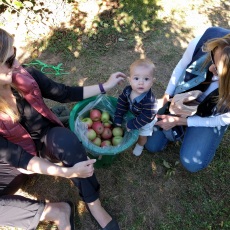 More to come from Santi and me on our time in Rosario!

One thought on “An apple-picking, history-learning, pizza-eating goodbye to the USA”